I had a magical adventure in Brooklyn. A quick stop at a bar to kill time turned into a lesson in drinking vodka with a couple of Russians. I was attending a late-showing of Then She Fell. And when my Lyft dropped in Brooklyn on a quiet street 40 minutes before the show started, I searched for a nearby bar. The only restaurant that came up that looked interesting was Masha and the Bear. I now know that Masha and the Bear is a Russian children's story about a little girl, Masha, and a fatherly bear who go on adventures. 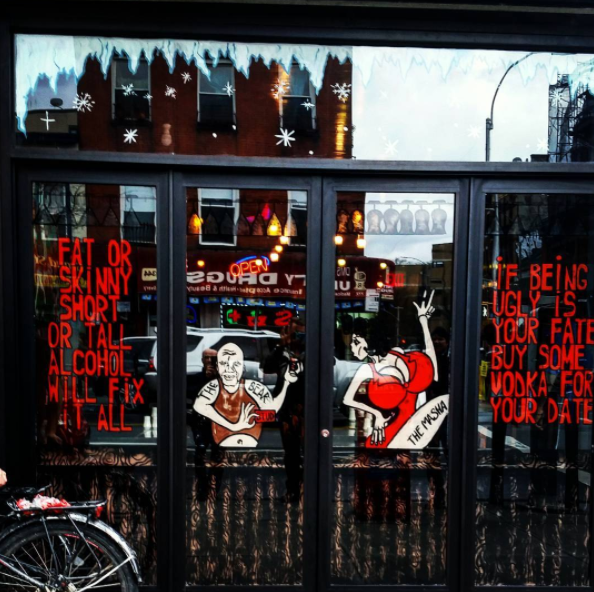 I walked around the corner and spotted the place. As I entered, there were only three people at the bar, and I got the sense that they all worked there. I was right. As they greeted me, I asked if they were open and received an enthusiastic "Yes!" from the bartender, a pretty, blonde woman, Alexandra and a "Yes, but the kitchen is closed because I'm too drunk to cook." from a Russian man seated at the bar, who I later found out was the owner, Vitaly. Everyone immediately laughed at his admission.

I sat down at the bar, next to one of the cooks, a Hispanic man with a wide, warm grin. He didn't speak much English but understood it and laughed easily at the conversation with his comrades.

They were in the middle of a traditional vodka-drinking ritual. So, when I arrived, and Alexandra offered me a drink menu, she immediately advised that I should have a shot of one of the infused vodkas. I protested, sharing that I was going to a show and didn't want to be drunk for it and got the response, "Yeah, yeah, yeah—Then She Fell. I've been to it. You'll be fine. You'll have vodka with us!"

She poured me a shot of Ginger Vodka and Vitaly told me exactly how I was to take the shot, as Alexandria made me up a traditional Russian sandwich—a small piece of Rye bread, with spicy mustard, and cured pork fat, topped with chives.

"Breath out hard-whoosh. Hold your breath. Take the shot. Do not breath yet. Take a bite of the sandwich. Then breath."

We clinked our shot glasses together and off we went. It was delicious. All of it. It was like I was in another world.

I listened to Alexandra and Vitaly share their experiences in the US, the differences between Americans and Russians. Apparently, Alexandra moved to the states a year ago, knowing no English, having left her job in Russia practicing law. She was shocked by how helpful the people in America are and how soon she was able to find a place to live and work. She now speaks English well and has an incredible understanding of social norms and nuances.

We took another shot and had another sandwich.

We discussed language, race, business, the difference between male and female relationships in Russia and America. I was told that in Russia "the woman stands behind the man." Literally and figuratively.

Thirty minutes went by in a blur, and I reluctantly left the bar to head to the show, longing for more time to spend in this little corner of Russia.

**Masha and the Bear

When I was a kid, I watched the made-for-tv Alice in Wonderland dozens of times. It was one of my favorite movies. It had incredible characters, including cameos from celebrities like Ringo Star.

In preparation for our trip to Cuba we booked flights and an AirBnB, ordered our Visa's and our traveler's insurance and then I set aside two hours the week before to plan the

People As Places
—
A Brief Russian Adventure
Share this