At the 2017 Origins Game Fair, they featured a new event, apparently a staple at other conventions previously, called "True Dungeon". As I read about it in the run-up to Origins, I realized it belongs somewhere in a category with the other immersive experiences we've been chasing, so I signed up.

The ticket price felt a little steep at $42, and parts of the experience are possibly a little inaccessible or confusing to people who aren't fans of the game "Dungeons & Dragons". As I got into it, I also discovered that there's also an aspect of "pay to win", where True Dungeon uberfans will drop hundreds or thousands of dollars on "equipment" (more on this later), and become more familiar with the game overall. Because it's team based, this isn't a massive problem, since everyone is on a team together, but there can be an inclination for them to "quarterback" the group, since they're the experts. All that said, these are my ONLY complaints about the experience. It was fun, and I had a blast, and I will probably play again given the opportunity.

Arriving at the check-in desk at my appointed ticket time (7:49pm… on the nose!) I was handed a small baggie of coins and ushered into the staging area; a dimly lit room with a small "U" of tables, the rest of my party was already there, so I joined and started catching up on the rules. We were seven overall, short of the max of ten; a good mix of newbies and veterans. In front of me was a laminated sheet with a diagram of a person. Each coin in the baggie was a piece of 'equipment' which I was to look at, and 'equip' by placing into a correct circle (i.e. A chainmail shirt should go on my torso, a badass pair of goggles on my face). No time pressure, and my party-mates (especially the repeat players) were more than happy to offer advice or lend a piece of armor or a weapon to cover shortcomings in my randomly-assigned starter baggie). A gamerunner in the staging room (our "coach") wrote down on a sheet what everyone had 'equipped' and we picked character classes (think Lord of the Rings… Gandalf the Wizard, Aragorn the Ranger). I was a Paladin — a general fighting type, who also was able to cast healing spells, like a fantasy version of a Knight Templar. We would carry this character sheet with us, to hand off to the "game master" in each room, who would reference stats on it to help narrate our experience.

Next we were lead into the "training room"; those of us who had never played were given an opportunity to learn specialized knowledge we would need for the game. The wizards memorized patterns that represented different elements they might need to reference later to cast spells, those of us with classes inclined to hit things practiced "combat". This was done by clicking an equipment token with our chosen weapon into a magnetic shuffleboard puck, and sliding it across a table into target zones. 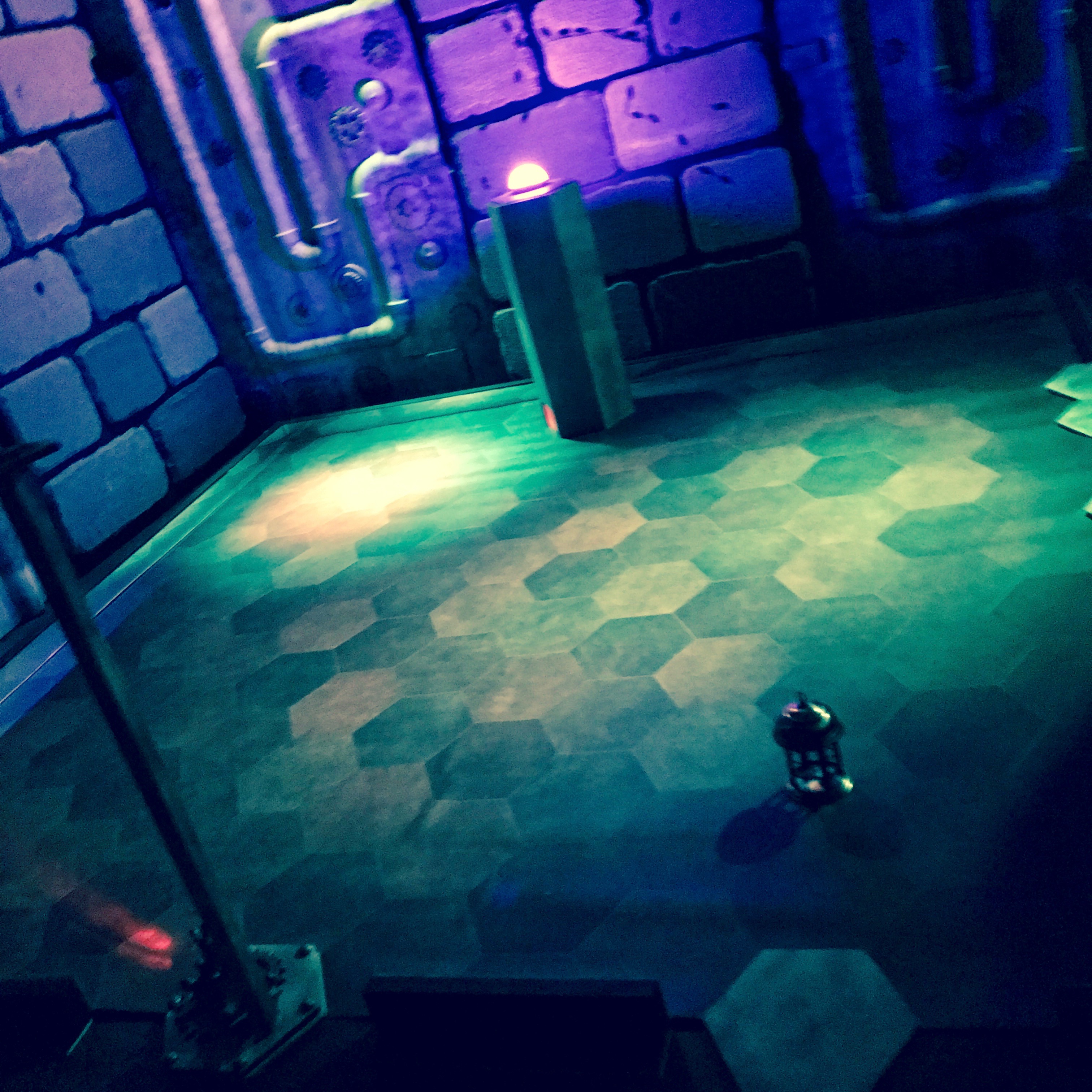 Feeling good about my shufflepuck attack skills 💪 and with total confidence in my teammates memorization of their wizard patterns and whatever else, we took off for the first room.

Rooms were a mix of fighting and puzzles; we solved a riddle to escape the first room, followed by a room with an actor who we had a conversation with before she attacked, and we used the "shufflepuck" scoring system to do battle while she paced and taunted us. We had 12 minutes per room, and if we failed to solve the puzzle rooms in time, I found out later, it changed up which room we went to next, in a sort of branching room layout.

Afterward, "experience points" were doled out to each player for having completed the experience, and we were given the opportunity to fish around in boxes for "loot" — new item coins which are ostensibly collectible and can be used as equipment in future adventures. I'll probably check it out again if it's offered at another convention I attend (especially now that I've collected a "rare" armor! How could I pass up the chance to use it?)

True Dungeon was a cool sub-genre of interactive experience — in addition to being immersed in the performance area with actors and set pieces which are meant to be explored and solved, the creators have layered actual game mechanics on top of the experience which give people a structured way to interact with the story.